In 2013, the Rochester Democrat & Chronicle (D&C) Editorial Board embarked on a listening tour to understand race relations in their community, creating Unite Rochester. Among many outcomes, it prepared them to get involved when the conversation turned ugly following the Ferguson grand jury decision. Unite Rochester’s recently formed Community Crisis Response Team convened a meeting of about 25 elected and community leaders who crafted a pledge to “reach out and respect”, inviting residents to sign it.

Acting as an interdependent part of the community, as the D&C did, contrasts with the independence from the people they cover that characterizes most of today’s journalism.

I recently returned from the Kettering Foundation, a research institute that studies democracy, where I joined public media journalists who are engaging their communities. We reflected on the ripple effects of this choice. I’ve captured high points of what I heard them say about working interdependently so that others can benefit from what they are learning.

For news organizations that want to consider even bolder experiments, I also look at the implications of increasing interdependence: Imagine news organizations leading the way to re-building civic infrastructure for coming to public judgment–in other words, developing the means for communities to tackle complex, important public issues and find broadly satisfying answers.

Journalism of the community: shifting perspective changes everything

The Gannett media organization’s recent re-organization created an “engagement editor”, a nod to connecting with the public in new ways. Implicit in this role is journalism that pursues the question:

How do we support our communities to thrive?

It’s a question that sits uneasily with journalists who value independence. A natural tension between independence and interdependence is always present in journalism’s relationship with communities.  Traditionally, walls between news, opinion, and marketing, coupled with ethical standards, have helped navigate through the tensions.

The New Ethics of Journalism, published this year by Kelly McBride and Tom Rosenstiel, introduces a more nuanced approach. In explaining the third of three principles, engage community as an end, rather than as a means, they weave a path through the tension without resolving it. It’s a reminder that there are no easy one-size-fits-all answers. Hopefully it also sparks conversations, like those we had at Kettering.

Recognizing that independence and interdependence exist within an ethical ecology of how journalists relate to the community, I’ve noted distinctions in how journalism is done that surfaced in the conversation at Kettering. 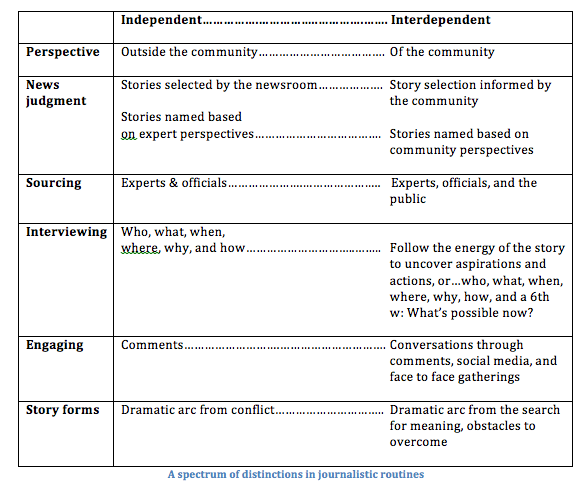 Audience-centered news judgment names the public, not experts, as actors

A Kettering insight: people implicate themselves as actors when they name something. So if a journalist primarily talks to experts, problems get named things like “crime prevention,” leaving experts, government, and institutions in charge of answers and as the focus of stories. When journalists also interact with the public, names emerge in which people see themselves owning community challenges. Crime prevention becomes “safe neighborhoods.”

In Kansas City, Missouri, KCUR launched a year-long series called “Beyond Our Borders” to explore things that unite and divide the region.  Their first stop was Troost St., where the city divides racially and economically.  Perceptions of the community were upended when staff members asked people in the neighborhood open-ended questions about what concerned them.  Stories on unemployment became more nuanced and empathetic, renamed based on what they said. Public transportation became central to the unemployment story, as residents discussed the difficulty of getting to and keeping jobs without a car.

Experts and public officials speak with an authoritative voice bringing valuable perspectives. They just don’t bring the whole story. As in KCUR’s story above, public voices bring a diversity of other views from the reality of their lives.

Journalists are inventing new ways of uncovering voices of the public. They go where people from diverse backgrounds are already engaged through social media and in physical space to listen, ask questions, and listen some more. Another approach is Oakland Voices, a project of the Oakland Tribune, which trains members of the public to tell stories they choose. Or take American Public Media’s Public Insight Network that enables journalists to hear from the public and uncover trends and patterns by posing queries to people who have signed on as sources.

Interviewing can uncover aspirations and actions

The questions we ask are fateful, shaping what we learn. If the focus is on understanding a problem, then asking who, what, when, where, and why about it makes us experts on the problem. It does little to address it.

If the point of engaging community is to support it to thrive, then ask questions to uncover possibilities and inspire action. Some general questions that can be adapted are:

From years of supporting groups to address complex issues, I’ve observed a natural rhythm in how people work. They start with what’s top of mind, often venting about the situation. Then they talk about what they want. With possibilities in mind, they mobilize.

An interviewer can work with this rhythm, asking questions that ground responses in personal experiences, drawing out the deeper stories behind reactions, exploring what’s possible now, and identifying actions that move towards possibilities. By uncovering not just information but also feelings and values from people with different perspectives, more textured, nuanced stories emerge.

The podcast, “Serial,” distributed through NPR, follows a convicted murderer believed by a friend to be innocent. It has sparked record downloads and online discussions as they track producer Sarah Koenig figuring out this story as she tells it.

Story telling models are ripe for re-invention! The episodic format of Serial is an old form revitalized. We need forms that help us see our differences and connections. When the dramatic arc comes through witnessing the intractable cracked open instead of through conflict, aspirations can be realized, and obstacles overcome. Data visualization can make patterns and trends visible. Providing information on who’s already doing stuff makes it easier to get involved. Coupled with stories, like the KCUR series, that help us see the humanity of people with different beliefs, values and perspectives, we can begin to understand a holistic picture of complex topics.

Ashley Alvarado, now at KPCC in Southern California gave an example at the first Kettering meeting I attended last February. She said two questions guided her:

Who is most affected? and

What information do they need to be their own best advocate?

In 2011, while working on an investigation related to earthquakes for the Center for Investigative Reporting (CIR), Alvarado realized that children were particularly vulnerable. So she created a coloring book. It has been translated into multiple languages and downloaded thousands of times.

Convening the public can bring breakthroughs to intractable challenges

When the issues are complex, diversity matters, and answers are unclear, journalists can use their convening power to host people with different views to solve problems and in the process, uncover great stories.

At the Gazette Company, reporter Kiran Sood was working on a series on affordable housing. She convened a group who didn’t normally meet of people from government, non-profits, and caught “in the system”. By engaging them in conversation with each other, they identified new ideas for addressing the challenge. She uncovered more useful stories.

News organizations can do more than just help us see the complexities of the challenges we face. They are ideally positioned to build alliances with other community institutions to co-create civic spaces for addressing shared challenges. In fact, I’m talking to two news organizations that are considering doing just that.

Imagine spaces where diverse people think together about shared issues, respectfully and creatively discerning what works for all and how best to achieve it. It may seem unrealistic because most of us have never seen such conversations and think, “people will never agree.” Loomio brings such a space alive online. The Wisdom Council is one of many face-to-face conversational practices that does the same. These elements can become part of a civic infrastructure that revitalizes the ability for ordinary people to participate in community life.

Questions for us all

The pioneers who are engaging their communities are making it up as they go along. Some of their work is visible in stories told at Journalism That Matter’s Engagement Hub, a space for peer-to-peer learning.

In that spirit of learning, what have you noticed about working interdependently?

How have you engaged your communities?

How has it shaped the stories you select?

How do you listen to public voices?

What do you notice about the questions you ask?

What story forms are working for you?